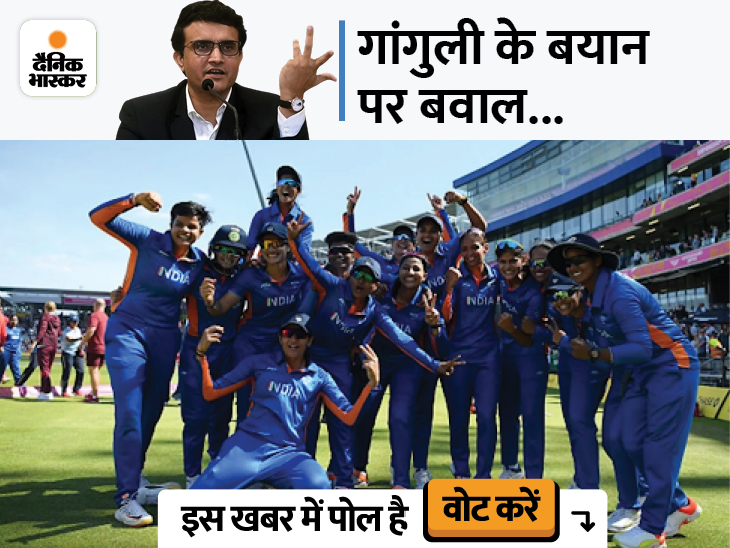 Indian women’s cricket team performed brilliantly in the Commonwealth Games 2022. He won the silver medal. For the first time, women’s cricket got a place in the Games. In such a situation, a statement of Ganguly has angered the country immersed in celebration after the historic medal. In anger, Sourav is constantly being criticized on social media.

Now give your opinion by taking part in this poll…

Fans don’t like Ganguly’s way of congratulating him
In fact, in the final match, the Indian women’s team had to face defeat by 9 runs in a close match against Australia. Earlier in 1998, men’s cricket was also included in the Games, when the Indian team could not win any medal. Because of this, everyone is appreciating the performance of the women’s team. India won 61 medals in the Games and was ranked fourth overall.

Meanwhile, BCCI President Sourav Ganguly has come under fire from the fans for his way of congratulating the team. Many fans are saying that despite the lack of facilities, players who have won medals for the country should be proud of their medals instead of being disappointed. Many people even transgressed linguistic decency in displeasure.

There was no complacency in the language as a powerful board president
Sourav Ganguly, congratulating the women’s cricket team, wrote, ‘Many congratulations to the Indian women’s cricket team for winning the silver medal. But she will go home disappointed, that was her game tonight. On this, the users and fans got furious and started trolling Ganguly fiercely. One user wrote that the women’s team should feel proud, they should not be disappointed. Another user wrote that it is not right to write such a message as the chairman of a powerful board.

India lost despite Harmanpreet Kaur’s scintillating batting
In the final match, Australia won the toss and batted first and scored 161 runs. Beth Mooney scored the highest 65 runs for Australia with the help of 8 fours. While Australia’s off-spinner Ashley Gardner took 3 wickets for 16 runs in 3 overs. Captain Harmanpreet Kaur scored the highest 65 runs for India with the help of 7 fours and 2 sixes.

While Meghna Singh and Sneh Rana took two wickets each. In the final, Smriti Mandhana and Shefali Verma could not perform as expected. Earlier, India had lost to Australia in the group round. The team made it to the semi-finals by defeating Pakistan and Barbados. The team had defeated hosts England in the semi-finals.